Can music enhance the presentation of a fashion show or not?

Tell us your opinion at the end of this post.

Music is an important part of our lives, and although each person is affected differently by it, we can not deny the influence that music has on us.

I am not going to talk in more depth, how music can and does affect the mind, the soul and our mood, and besides I have not studied psychology so as I can do this, but from the experience that I have collected from the field of gymnastics, because of my studies, when I was using the right music, I could change the mood of the people that I was exercising and made them to enjoy their training and to perform it with more willpower and intensity.

So inevitably the music could not be missing from the fashion world. The truth is that most often the music that is heard during the fashion shows is being neglected and it is not mentioned by the people who comment and criticize the various collections of clothes that are being presented to them.

But what they must realize is that music plays a very important role in the success of a fashion show. It has the ability to strengthen many aspects of the show, as well as and the overall impact of the fashion collection.

The background music of a fashion show should be properly selected for it, so that it can be attributed the creativity and the talent of the designer with greater emphasis. On the other hand it gives the necessary self confidence to the models so as to enable them to present the clothes more freely and creatively.

Imagine yourself walking in front of people, most often wearing less clothes and not hear any music at all. Simply this could not have be done. While on the contrary the music succeeds to release the models from any anxiety feeling they might have and to help them to give to the clothes that they wear the best possible presentation. Thus we realize that music has the power to present the flair of the designer’s work in such a way that by itself the collection could not have accomplished it.

Several times lately we observe that the presence of music in fashion shows has grown enormously, and simultaneously it has been strengthened so much that in some cases this music can even becomes and live. Live music on the one hand, certainly gives a different glamour to the spectacle of the fashion show. But on the other hand there is a risk, when there are no limits in which music has to be moved, the balance between these two would be overthrown. This has as a result to be greatly increased the probability to forget that clothes were the main attraction for which we went to the fashion show and eventually to believe that we have attended a music concert.

But when the background music of the fashion show has been selected carefully, then there is perfect harmony between the clothes and the music, so as the designer succeeds in 10-15 minutes to tell us a ‘story’ for his clothes, which is being imprinted with more intensity on our minds and make us to continue to talk about this show, even for a long time after its presentation.

In this new category of my blog that I’ve created and it will concern fashion shows, I will try to present to you fashion shows that I personally like, but at the same time making an effort to let you know the songs or music that is heard during them.

If you notice a mistake in recording them or you have to add something else about them, your input in the comments are always welcome. Keep in mind though that several of the audio tracks that are being played during fashion shows, are being modified, so usually they differ from the originals.

I would like also from you to tell me your opinion on the subject of music in fashion shows, taking part in the poll which appears below, by selecting the appropriate option that expresses you.

Thank you very much for your support and love that you show to me and don’t forget to live every moment with passion!

Sense of a kimono! 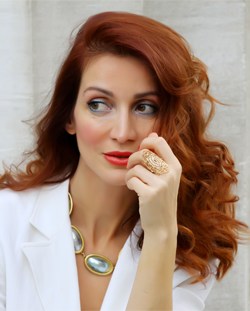 Elegance needs no excuse!
We can have style and elegance in every look of ours!

I’m Menia Ioannidou,
a working mother
and a personal style fashion blogger,
strongly advocating that
we should never stop following our dreams,
listening always to our heart,
and trying to live every moment of our life with passion!

Ι'm so thrilled that you're here!
Let’s get to know each other!